Chef Mike Ward began his successful cooking career in his native Australia, and he eventually found himself preparing meals for the likes of Julia Roberts, Tom Cruise and Nicole Kidman. Now relocated to Canada, he’s added titles like food journalist, satellite radio personality, award-winning TV producer, and entrepreneur to his resume. He was featured in a recent issue of The Edge: A Leader’s Magazine’s as part of our Winners’ Circle, and below is a portion of that interview.

What qualities define a great chef?

The same qualities that define the world’s greatest chefs also define keen home cooks: never, ever stop learning. Once a cook of any skill level loses his or her appetite for learning, then it’s game over.

What sorts of challenges did you face when you first began your cooking career?

I think the biggest challenge I faced early in my cooking career was quenching my appetite for inspiration. There was no internet when I started cooking, so I picked up every cookbook that was in existence and ate in every new restaurant in town, but I just couldn’t seem to get enough. Now with social media and the internet, particularly Pinterest and Instagram, there’s so much terrific food inspiration out there for new cooks. 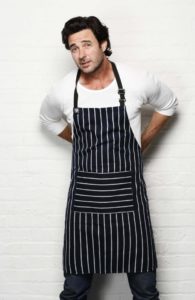 You are the former Editor-in-Chief of the food section of Canadian Living. Do you miss working for that publication? What was your philosophy while you were there?

I loved the time I spent working with Canadian Living magazine. They asked if I would work with them for a little while to overhaul their food program and reach out to a younger audience. It was an interesting exercise – the magazine is such a strong Canadian heritage brand, and I was tasked with designing a food program that didn’t alienate its existing audience but also reached out to a younger, perhaps broader audience. I’m happy to say I think we achieved those goals. I had a great team working in the kitchen with me there. The one thing I tried to install within them is to be fearless in the way they design their recipes. I think it’s a mistake to cook one thing for your audience publicly but something different for yourself at home. A reader can smell authenticity.

What have you learned from a career in media that has helped you as a world-renowned chef?

Media and food have something very important in common. When done well, both communicate thoughts, ideas, and emotions – through different mechanisms of course, but the goal is the same. My experience in media has translated to food in terms of understanding the importance of how you want the consumer to feel before you embark upon creating a dish, what’s the end goal of what you’re trying to achieve. It’s not feeling a person’s stomach, it’s creating a feeling, trying to potentially tap into a memory. That’s not as scary and intellectual as it may sound. For instance, if your goal is to create a salad, you might want to ask yourself, do I want the diner to experience a Saturday afternoon in the park, or are we doing something a little nighttime, warmer, cozier? Suddenly, the answers to those questions start to trigger inspiration around ingredients and the appearance of a dish.

To what extent do you think accessible good-quality food is missing in Canada and US nowadays?

My biggest fear surrounding accessibility in North America is rising prices in the supermarkets. There will continue to be consumer demand for luxury supermarket shopping experiences, but as long as inexpensive, less glamourous supermarkets remain in place, good ingredients will remain accessible to most people.

Who has been your most intimidating client and why?

I would say my most intimidating customers continue to be my two daughters. There’s absolutely no filtering when it comes to their feedback. However, much I adore their honesty, it’s my legal responsibility to feed them, so sometimes I just push things back in front of them and tell them there’s nothing else on the menu.