Pamela Ogang is a born entrepreneur, and champions economic empowerment and the idea of business being fun and liberating. A founder of two businesses geared towards helping entrepreneurs, she founded Minority Women in Business (MWB) Inc. in 2015 and that same year was named one of Canada’s Top 30 Under 30 Sustainability Leaders. Her current business is PR Hound, a “matchmaker” of sorts that connects small businesses and entrepreneurs with journalists and media outlets that can provide them with coverage. She was profiled in the Winners’ Circle section of a previous issue of The Edge, and this is part of that conversation.

How did you go from studying Anatomy and Cell Biology at McGill to founding Minority Women in Business and pursuing entrepreneurship?

Like any overachieving child with pushy parents, my childhood dream was to become a doctor and I was on my way to achieving my dream when I got accepted into McGill. Unfortunately, in my final year, I came to the realization that if I died in the middle of my studies, my tombstone would likely read, “She worked really hard” – I spent so much of my time studying instead of nurturing my relationships. I quickly finished my science degree and launched myself into a business degree hoping to become some type of businesswoman-scientist.

Years later, armed with two degrees and serious job dissatisfaction, I decided that I’d rather create my own opportunity than send my resume into the HR abyss. I always wanted to create a community of women where ideas could be explored freely and without judgement.

Why women? Just because. To me, asking “why women?” is equivalent to asking a fish why it swims. As a young girl, I didn’t want to be just any doctor, I wanted to be an obstetrician – I was born with the desire to help women.

Within weeks, I created a community for women that I called Collective Labs, and my project eventually evolved into Minority Women in Business (MWB). 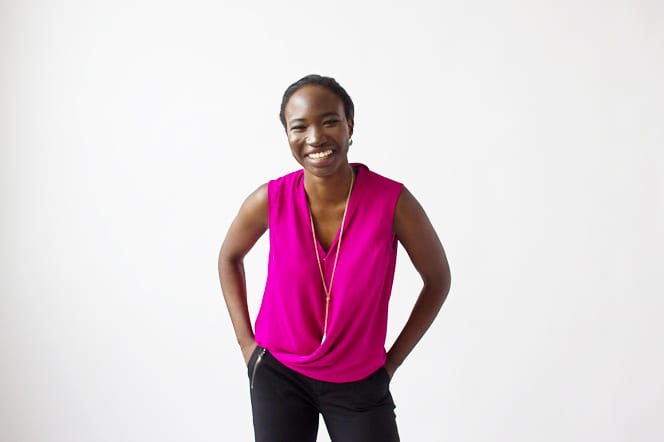 With PR Hound, you’re an entrepreneur who helps other entrepreneurs with their PR and promotional needs. Why did you choose to focus on smaller, entrepreneurial businesses?

I want to fight for the underdog. I believe that entrepreneurship is the ultimate tool for empowerment. It’s magical to see how a fleeting thought manifests itself into reality. Unfortunately, many businesses die because of lack of promotion.

After putting MWB on hold, I spent two years running an entrepreneurship program for low-income women for a non-profit. Seeing how my clients failed at or even avoided promoting their business because of fear broke my heart. Since day one, PR Hound’s mission has been to make it easy for deserving local small business owners to stand out and fulfill their entrepreneurial dreams.

You obviously took some big risks and bet on yourself when creating and launching PR Hound. How did you stay confident and driven on the daunting path of entrepreneurship?

Who said anything about confidence? What keeps me driven is self-discipline and a strong desire to see people build lives of their choosing.

Like many entrepreneurs, I faced a dilemma: stay in a job that claimed all my free time and was slowly killing me or take my chances and potentially fail in starting a business. I chose to commit to PR Hound.

With trembling hands, I handed in my letter of resignation. Ironically, one week before my last day, the non-profit went bankrupt – I took it as a sign. This time, while the temptation to retreat was growing and my savings were slowly dwindling, I was determined to see my ideas fully realized.