Be More Chill and the teen-fuelled wave of Broadway musicals

Call it a high school musical for the social media generation.

When Be More Chill premiered in 2015 at the Two River Theater in New Jersey, the influential New York Times gave it a tepid review, leading co-creator Joe Iconis to sadly proclaim the musical “dead.”

How, then, did the show make it to the Great White Way?

It’s thanks, in part, to a new wave of young fans hungry for musicals that speak — or sing — to them.

Be More Chill‘s young fan base wouldn’t let the show rest in peace. They flooded the internet with their own videos, art, cartoons and cover songs, and the cast album racked up more than a 150 million streams on Spotify.

Now fuelled by this huge online enthusiasm, Be More Chill has its highly anticipated opening on Broadway on Sunday.

The fandom has remained strong through preview performances, with fans gushing that the show is “amazing.”

Last night I saw <a href=”https://twitter.com/BeMoreChill?ref_src=twsrc%5Etfw”>@BeMoreChill</a> and I swear to god, I fell in love with it even before it started. I cried a lot actually just because I was amazed?? Seriously, that play needs to be BIG. It is just amazing.

I love how many friendships <a href=”https://twitter.com/BeMoreChill?ref_src=twsrc%5Etfw”>@BeMoreChill</a> has created, its truely amazing. i love my squip squad ?

never in my life did i think i could find something that accurately represents my thoughts and emotions on people. this show has helped me through some of my most darkest times, and for that i am forever in debt to <a href=”https://twitter.com/MrJoeIconis?ref_src=twsrc%5Etfw”>@MrJoeIconis</a>

Based on the 2004 young adult novel by Ned Vizzini, Be More Chill is about a high school nerd who gets popular by popping a pill that makes him act cool. It was written by Iconis (music and lyrics) and Joe Tracz (book).

The capsule contains a microcomputer that guides his actions, by means of an onstage character called The Squip (Super Quantum Unit Intel Processor), who channels the voice of Keanu Reeves to help the protagonist try to win the girl of his dreams.

“We sort of had that moment when we stepped back and realized that this isn’t just a little blip; this is like an avalanche building,” recalled Tracz.

Joe Tracz, left, and Joe Iconis are the co-creators of Be More Chill. They call the show ‘a celebration of misfits’ and say they want the audience ‘to leave feeling like they can carry that sense of joy and celebration in their own lives as well.’ (Nigel Hunt/CBC)

New York theatre producers took notice and remounted the show off-Broadway last summer, when it sold out its entire run before opening night. So now Be More Chill‘s curtain is rising on Broadway.

“To have actual human beings be enthusiastic about the work and to fall in love with this musical that we made — that they had never even seen — and have that be the thing that got a producer interested in wanting to put the show on a stage is just beyond gratifying,” said Iconis.

Be More Chill is the latest in a growing number of Broadway shows with strong appeal for teen or young adult audiences. While the traditional image of Broadway theatregoers may be older adults, that’s changing.

The Broadway League’s most recent demographics report on New York theatre attendance shows the audience is getting younger. Last year’s average was just over 40 years old — the lowest number since 2000.

Theatregoers attending musicals specifically proved to be even younger, with an average age of 39. More than 30 per cent of Broadway musical attendees last year were under 25. 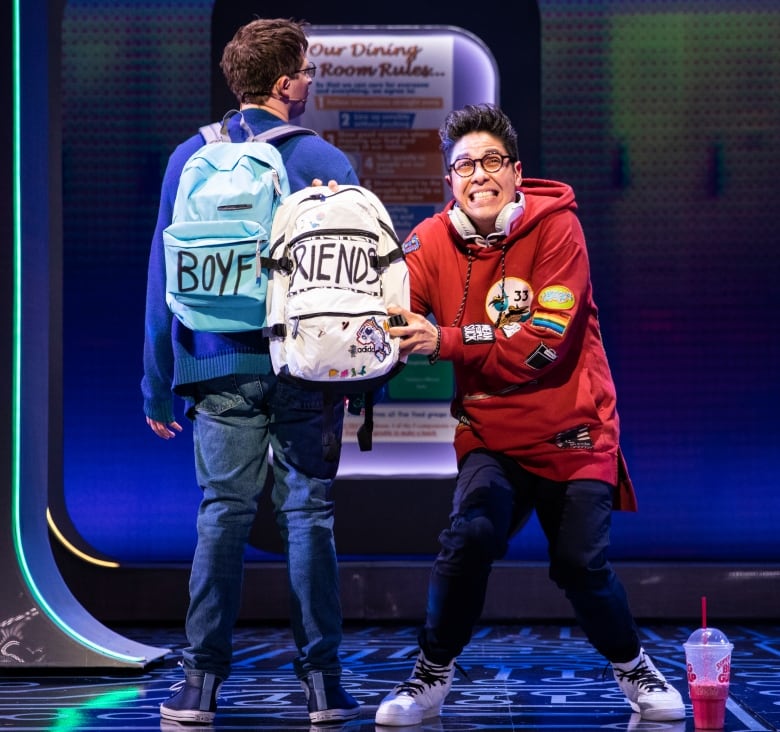 Will Roland, left, and George Salazar appear in a scene from Be More Chill. Salazar sings the show’s song, Michael in the Bathroom, which has been covered by hundreds of fans who post their videos on YouTube. (Maria Baranova)

“It’s definitely on the minds of producers as they decide what to bring here, because they’re looking to attract as broad an audience as they can,” said Michael Paulson, the theatre reporter for the New York Times.

According to Paulson, these changing demographics are the reason why Broadway is seeing a lot more shows dealing with the experiences of adolescents. Be More Chill comes on the heels of such recent productions as Mean Girls and Dear Evan Hansen.

“Many of these shows, in one way or another, acknowledge the kind of isolation and loneliness that teenagers can often feel in school settings,” he said. “Those are issues that are very much on the minds of adolescents and I think they appreciate seeing experiences that they relate to onstage, and it’s part of what draws them to these shows.” 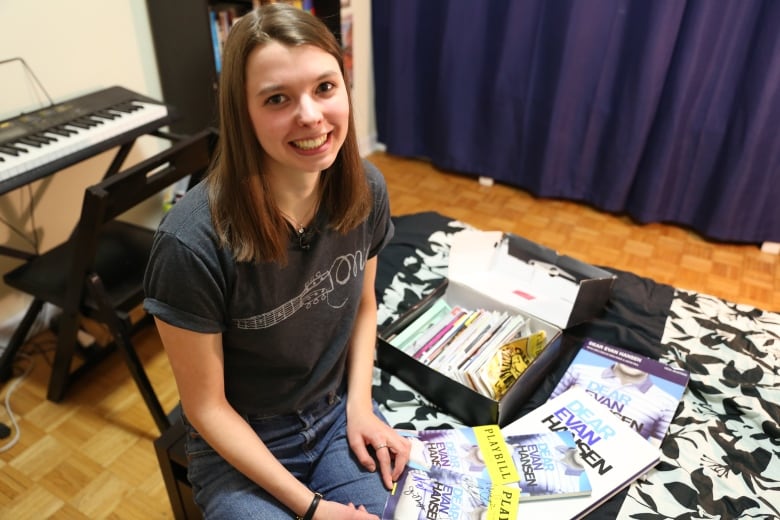 Toronto student and musical theatre fan Arin Klein has taken the overnight bus to New York to see Dear Evan Hansen twice on Broadway. Luckily for her, the show is now playing in Toronto. (Susan Goodspeed/CBC)

That relatability is exactly why Toronto musical theatre fan Arin Klein trekked down to Broadway twice when she was a teenager to see Dear Evan Hansen; she could relate to the theme of anxiety that’s explored in the show. The now-21-year-old student recalls taking the overnight bus, staying in a hostel and lining up for hours in the cold to buy rush tickets.

“The script feels so realistic,” she said. “It feels like the way that teens actually speak. And it’s funny, but it’s also genuine.”

Klein is now looking forward to seeing the show again in Toronto — without the lengthy bus ride. A Canadian production of the Tony-winning musical has just started this month.

Another reason why teens and young adults are flocking to see musicals? They’ve been raised on hit TV shows such as Glee, Smash and Rise, as well as live TV broadcasts of musical theatre.

That’s why today’s younger theatregoers don’t find the aesthetics and conventions of Broadway musicals — where characters burst into song and dance — to be off-putting, according to Alan Henry, a Canadian writer for the website Broadway World.

Henry also thinks the accessibility of so much music at our fingertips has played a key role.

“You can pretty much find any musical ever recorded somewhere online on your phone in a matter of seconds,” said the New York-based writer. “And that creates these great communities of people who love the same thing.” 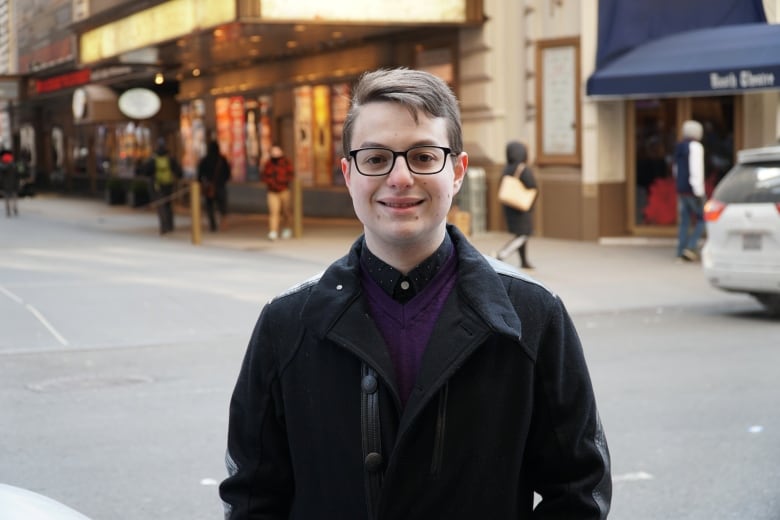 That instant access to the music is exactly why Be More Chill has risen from near-death to become one of this season’s hottest shows on Broadway. In its first week of previews, it sold the largest amount of tickets ever at the 922-seat Lyceum Theater, one of Broadway’s oldest venues.

‘Gas on the fire’

The intense fan appeal of Be More Chill has also been amplified by savvy social media marketing.

“Our goal has been to come and throw gas on the fire,” said Mike Karns, CEO and founder of Marathon Digital.

Karns’s company created social media posts and dozens of behind-the-scenes videos featuring footage of rehearsals and conversations with the cast — all focused on building the connection between fans and the show.

Last September, to ramp up excitement ahead of the announcement that the show was headed to Broadway, the Be More Chill Instagram account went dark. Fans went wild speculating about the news.

The following day, 15 different Instagram accounts — with a collective potential audience of 1.5 million — were taken over by the show’s cast and creators to share the news with fans.

Karns, who also worked on the social media campaign for megahit Hamilton, says this type of marketing is a “must have” for Broadway shows today, with productions now spending 10 to 25 per cent of their advertising budget on social platforms.

‘It wasn’t a cynical enterprise’

In recent weeks, young fans have been waiting outside in the cold after Be More Chill‘s previews to tell the cast how much the show means to them, to take selfies and to get their programs signed. Social media may have inspired them to turn up — but they stick around because the show feels true to their lives, say the creators.

“I wasn’t trying to write for teenagers.… Even though the characters in Be More Chill are teens, I don’t think of them as a different species,” said Iconis. “I think that’s why it is a hit with teens: because it wasn’t a cynical enterprise.”

“I never felt like we were writing something that was talking down to an audience or trying to be cool,” Tracz added. “The whole message of the show is you can’t try to capture that. You can’t try to put on a manufactured cool. You just have to authentically be yourself.”

Joe Tracz and Joe Iconis, the creators of anticipated stage musical Be More Chill, on the new wave of young fans for Broadway shows. 1:38