Lorraine Cormier: Never Too Late to Find Your Calling

Despite entering the field later in life, Lorraine Cormier worked her way up in the microblading and micropigmentation industry, becoming known as the “Eyebrow Queen.” She created her own business, Artystyk, Canada’s first bilingual micropigmentation education centre, in Moncton, New Brunswick. She was featured in the Winners’ Circle section in a past issue of The Edge, and this is an excerpt of that interview.

How have you dealt with the challenges of owning and running your own business(es)?

I deal with the challenges just like everyone else in business does: with a glass of wine [laughs]. I always told my daughter, “No one ever died because their electric bill was a couple of months behind.” I think of all the obstacles that have come my way and how I was able to overcome them. I do what I can do, I pray at night and leave it to God as I go to sleep. Then I face the next day.

You’ve said that esthetics isn’t about simple vanity, but about helping people feel good about themselves. How does what you do help people in their day-to-day lives?

Imagine going through a life-threatening illness, or nervous trauma, or things that you have no control over, like the aging process. Through any of these situations, losing your eyebrows is always a possibility. Losing your brows takes away from the symmetry and balance of your facial features. Being able to create brows through micropigmentation gives back balance, it gives back self esteem. There are so many ways in which micropigmentation has changed people’s lives. Areola tattooing for breast cancer survivors, scalp pigmentation from loss of hair, camouflage after accidents… the list goes on. 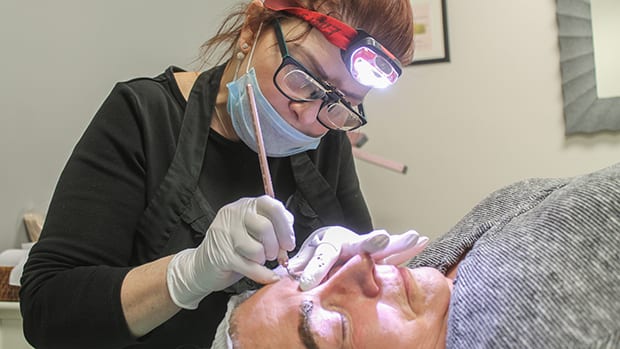 In addition to your micropigmentation business, you also launched the Princess and the Purse campaign. What was your motivation in creating it, and how has it grown since it began?

As a single parent who had struggled financially, it seemed ironic that years later I’m laying on a bed, in Spain, taking a course to further my education and training in microblading. As I lay there I thought of how far I had come, how hard I had worked, and how blessed I was to be here.

I remembered the days as a single parent going to the doctor’s offices and taking samples of makeup and perfume out of magazines and bringing them home, putting them on my dresser and saving them for a special night.

As I laid on my bed in Spain, I sent a message home and told the girls we were going to have a Christmas campaign. Once I returned to Canada, we sat down on November 11th, 2015, and put our Facebook page together, calling it Princess and the Purse. We explained what the process was and before the week was over we had over 45,000 views.

We asked people to donate a gently-used purse and fill it with things we had in our purses that we took for granted, things that a woman on a strict budget would never spend on herself. Everything that went in the purse had to be new: makeup, bathroom essentials, shampoo, deodorant, etc. The first year we collected 500 purses. We put them in Christmas bags with tissue paper. We called local charities and organizations to see if they would accept our gifts; no one refused.

In 2016 I reached out to different people that I knew and asked if this was something that interested them. If they said yes, I added them to a private group where they could share ideas. We then had a college join us and they were able to collect and fill 100 purses. Our total for 2016 was 750 filled purses.

In 2017 the college returned, and a high school joined us. With the help of these two groups we were able to collect 750 purses again and donate them to seven different organizations. Princess and the Purse has reached most of the provinces in Canada. It’s now spreading into the United States, in places like New Orleans, New York, Florida, California, Kentucky.

The reason I started this non-profit charity was because, as moms, we always put our families first. We will do anything to make sure Christmas is as good as we can make it. We put everything in, even our last dollar. Then we sit back, smile, and watch what we’ve been able to create, never thinking of ourselves. We’ve heard stories where women go to the food bank to get their food for Christmas and as they walk out they’re given their purse. They’ve broken down and cried because someone thought of them. Imagine all the smiles we were able to create… That’s what I get out of this.

How important is it for you to give back?

I truly believe that I have gone through many adversities so that I would understand the importance of what was about to be created. You can’t talk the talk if you haven’t walked the walk. Princess and the Purse means more to me than my business. Creating a business and watching it grow is a stressful process; I’m very proud of what I have created, but the stress is continuous. With Princess and the Purse, you’re able to help so many people and make them smile, even if it’s just for a short time. All the other women who have joined this charity in other provinces and states can also experience giving back to their community. Princess and the Purse is like a business but without any monetary value. However, what we’re able to do with it is something that money can’t buy.