A tree fell on their dream home, and that was just the beginning of their nightmare

When Brian Carlson-Graves and Daniela Malandruccolo bought their dream home in 2015, they didn’t think they might lose it twice.

Their house, on the shore of Lake Scugog, about 80 kilometres northeast of Toronto, was badly damaged after a tree fell on the roof in October 2017. 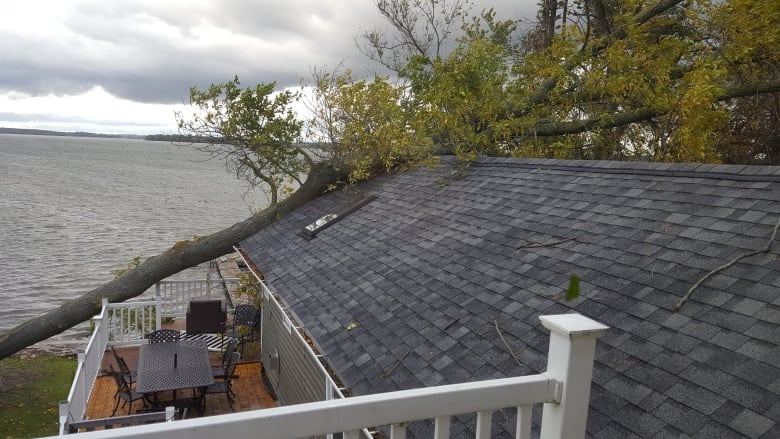 A heavy windstorm toppled this massive tree onto the couple’s lakefront home in October 2017, just two years after they purchased it. (Daniela Malandruccolo)

The couple filed an insurance claim and an engineering company was brought in to assess the damage. It applied to the Township of Scugog for a permit to do repairs, but was denied because roughly two-thirds of the house was built without proper permits.

“It was quite a shock,” said Carlson-Graves from the rented house they’ve been living in for nearly a year and a half.

“They said, ‘Well, [that part of the house] is not even supposed to be there.'”

The couple is now wading through a bureaucratic nightmare as the house has been deemed structurally unsound. The property needs to be rezoned. Then, they need to apply for a permit from the Township of Scugog to rebuild.

The other wrinkle is that the two-year window for Carlson-Graves and Malandruccolo to submit receipts for the repairs to their home insurance provider AVIVA expires in October 2019.

The township won’t say if or when it will grant the couple building permits.

“It’s one thing to be out of the house for this long, but then to also add the fact that we might not be able to rebuild it with the money that we thought we were going to have was shocking,” said Malandruccolo.

The couple said there were no red flags when they initially bought the home in a private sale, but they have since learned a previous owner carried out construction sometime between 2005 and 2008. They said they were never told prior to purchasing the house that those renovations were carried out without a permit. 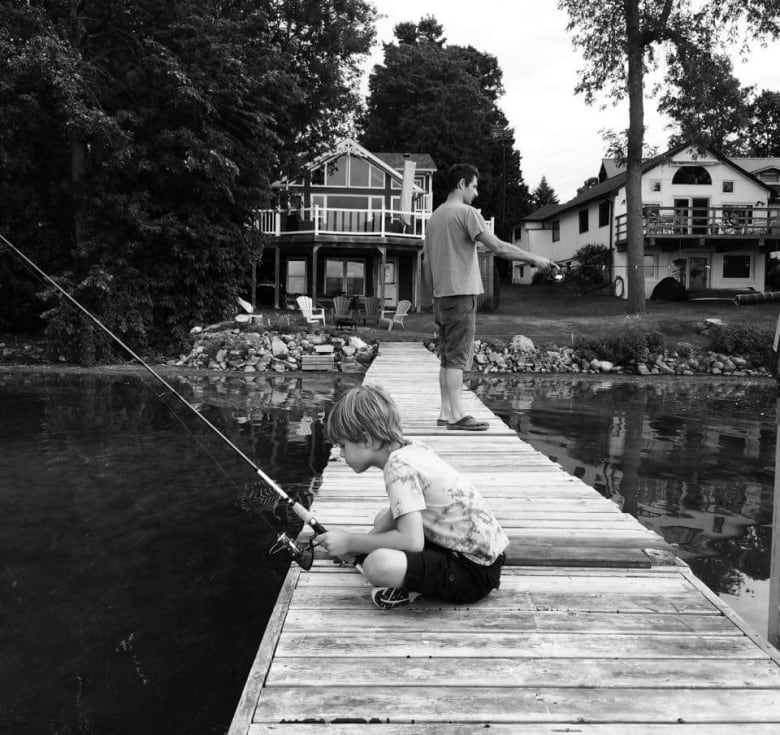 A snapshot of the couple’s lakefront home before the tree fell. It’s on Lake Scugog in Port Perry, Ont. (Daniela Malandruccolo)

“You always assume possibly maybe a deck is built without a permit or something. Those things happen,” said Carlson-Graves, who has worked in construction for 20 years.

“But having over half the house built without a permit is just … I don’t know what to say about that.”

The couple is now running up against infractions they couldn’t foresee. For example, the town’s bylaws have recently been updated to exclude any building within 100 feet (30 metres) of the lake, Carlson-Graves said. 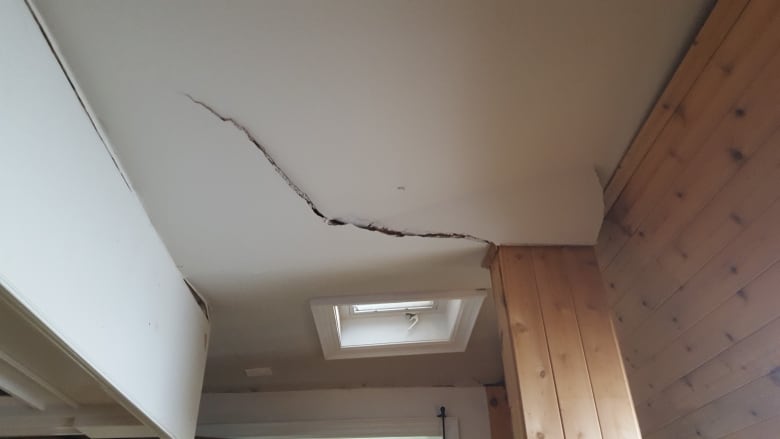 A glimpse of some of the damage from the tree that fell on the home. After the house was examined, it was found that various parts of the home were constructed without a permit and it was not structurally sound (Daniela Malandruccolo)

“The entire property is only a hundred feet. So there’s nothing, really; no guidelines for our kind of situation,” said Carlson-Graves.

“These days, they wouldn’t allow any of those properties to be built.”

The couple is now working with a municipal planner who will then present an application to the city, but that could take months.

The couple came to an agreement in June 2018 with AVIVA Insurance on a settlement cost to repair the damages and were told they had two years from the day they filed the claim in October 2017 to submit their receipts.

In September 2018, Malandruccolo contacted AVIVA to explain the situation and asked about the possibility of an extension to that deadline.

The company responded in an email, saying there are no exceptions to the deadline and that she could either file the receipts before that day or start legal action against AVIVA.

“It was just a topping to the whole storm of things.” 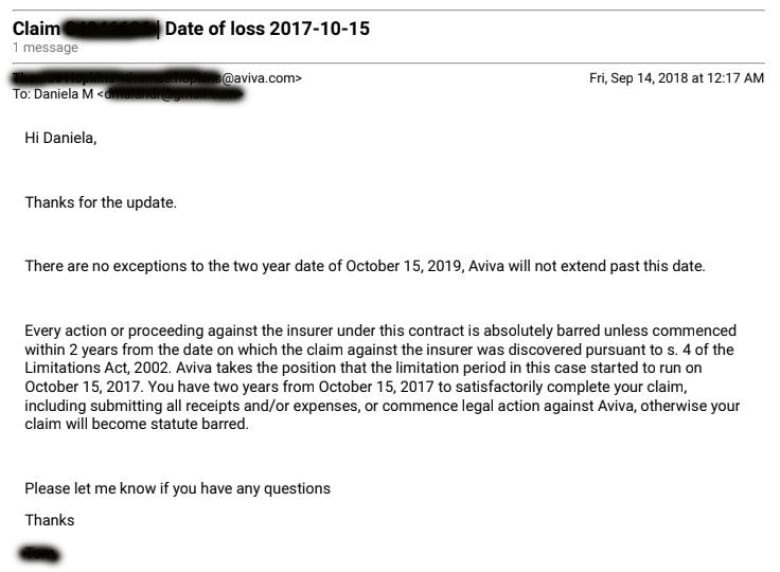 After CBC Toronto contacted AVIVA, a spokesperson said there are instances where an exception can be made.

“Occasionally, circumstances beyond a homeowner’s control may impact their property claim being resolved within the statutory two years’ time limit,” the company said in an emailed statement.

AVIVA told CBC Toronto it’s too soon to know whether they would approve an extension in this case and any decision would be made closer to the deadline.

No one from the Township of Scugog would speak to CBC Toronto for an interview, despite repeated requests, but the township did issue a statement.

“Unfortunately, the homeowner and our building official learned that there were two significant additions and a large deck constructed without building permit approval,” the emailed statement reads. 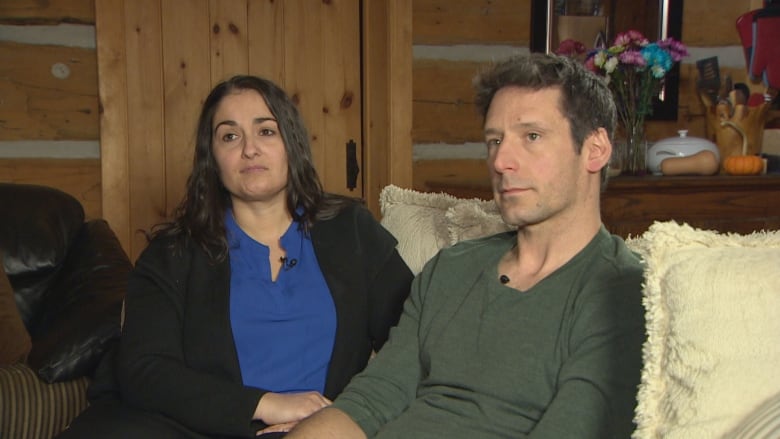 Daniela Malandruccolo and her partner Brian Carlson-Graves are now living in a rental home while they wait for the township to grant them a permit to begin construction. There’s no estimate on how long that might take. (Susan Reid/CBC)

“Because of that discovery, the home owner will need to submit … a planning application … with applicable drawings; and a structural engineer’s report inspecting the areas constructed without a permit to ensure they are in compliance with the building code.”

Officials said there are fines in place for those who construct without a permit, but added its bylaw department is complaints-driven.

The Township of Scugog will have the final say on whether the couple can receive a permit to rebuild their house.

“We don’t know how it’ll go. Ultimately, Scugog township councillors vote on it. So hopefully, they’ll give us some slack and let us keep what we purchased at least,” said Carlson-Graves.