The SNC-Lavalin scandal so far: plenty of drama, few facts 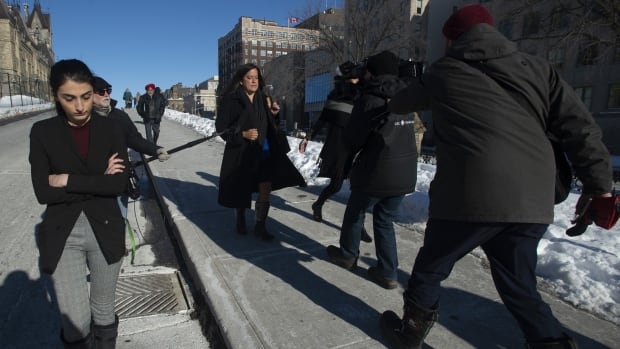 In official Ottawa, some weeks feel longer than others. This one scarcely got started before the SNC-Lavalin affair exploded — again — leaving more questions than answers. And it’s only Wednesday.

First, Gerry Butts stunned everyone Monday by abruptly resigning as the prime minister’s top adviser — even as he insisted that neither he nor anyone else in Justin Trudeau’s office sought to pressure former attorney general Jody Wilson-Raybould to stop the criminal prosecution of SNC-Lavalin.

A day later, Wilson-Raybould sent jaws dropping everywhere when she emerged from a meeting of Trudeau’s cabinet — the same inner circle she quit just last week. She was there for a few hours at her own request, the prime minister said.

Not even the din generated by a convoy of several hundred pro-pipeline supporters blaring truck horns on Parliament Hill yesterday could drown out the sound of reporters demanding to know why Wilson-Raybould met with the cabinet she’d just spurned, and what she said to her former colleagues.

And it’s not over yet. Today, Wilson-Raybould is expected to attend the regular Liberal caucus meeting. Her reception there may not be as warm as she’d like, given her role in a consuming political drama that seems to be settling in for an extended run in the nation’s capital.

Her caucus colleagues no doubt will want to know what she told cabinet Tuesday. If she falls back on her statement that she’s still bound by solicitor-client privilege and cabinet confidentiality, Liberal MPs will still want to know whether she felt pressured, directed or nudged by anyone in the Prime Minister’s Office to give SNC-Lavalin the option of paying a fine in lieu of going to trial on fraud and corruption charges.

The MPs on the Commons justice committee would like to hear her answer that question as well. They voted Tuesday to add Wilson-Raybould to their witness list after the Liberals — who had refused to put her name forward last week — relented Tuesday.

Other MPs spent much of Tuesday in the Commons debating an NDP motion demanding two things: that Trudeau waive solicitor-client privilege to allow Wilson-Raybould to tell her side of the story publicly, and that he agree to an independent public inquiry similar to the one led by Justice John Gomery on the Quebec sponsorship scandal.

The first of those demands is probably the less important one. Just about everyone, in government and out, expects Wilson-Raybould to speak. It’s why she hired a former Supreme Court justice for legal advice. It’s why Butts abruptly departed, even as he denied the allegations again.

“My reputation is my responsibility and that is for me to defend,” Butts wrote. “It is in the best interests of the office and its important work for me to step away.”

Fair enough. That’s not going to convince the opposition to abandon its demand for an independent accounting of conversations in government circles last fall — when SNC-Lavalin was lobbying just about everybody who’s anybody for a ‘deferred prosecution agreement’, a new legal tool introduced by the Liberals in a budget bill approved last June.

Charlie Angus, who sponsored Tuesday’s motion, said a public inquiry would provide the “transparency and accountability promised by the Liberals in the 2015 election campaign.”

Perhaps anticipating the Liberals defeating his motion this afternoon, Angus offered his own, highly-partisan version of the events that make up the SNC-Lavalin affair — a theory to explain why the government might be eager to cut a deal with the Montreal-based construction giant.

“It was about the government and this prime minister’s insider relationships,” he said as he opened debate in the Commons. “There is nothing more negative for public life than corruption and cronyism.”

The Conservatives are just as eager to convince Canadians there’s a cover-up here.

“The way in which this story has unfolded, with almost daily changes to the prime minister’s version of the events, with high-profile resignations, with anonymously-sourced smear campaigns … suggests this is not an ordinary political scandal,” Conservative Party Leader Andrew Scheer told the Commons.

“Something more sinister is at play here,” Scheer added, alleging what he called a “deliberate attempt to obstruct justice” by unnamed people in the PMO.

Who are these people (allegedly)? It’s a mystery. Who were the sources behind the leak that led to the original Globe and Mail report nearly two weeks ago? Also a mystery.

But this is an election year, and this story carries the whiff of scandal from the highest reaches of the Trudeau government. So the opposition is taking it all as gospel — no matter how the allegation first came to light, no matter who the source or sources might be, no matter what their motivation was for leaking to the media.

The prime minister looked almost weary as he rose to his feet in the Commons Tuesday to take even more questions. But after days of offering vague answers that only spawned more questions, Trudeau offered no new information yesterday on why Butts resigned.

There was no big reveal about why he agreed to let Wilson-Raybould appear before cabinet as a former minister. No suggestion that he would agree to waive solicitor-client privilege before he gets a legal opinion from the man who replaced her as attorney general. No answers. Not yet.

And it’s only Wednesday. Brace yourselves.