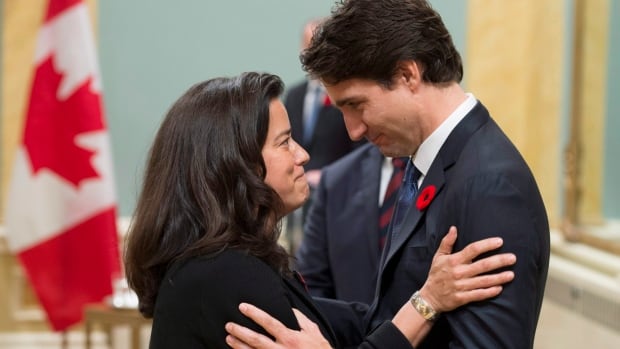 In the week since the SNC-Lavalin story broke, Prime Minister Justin Trudeau has changed his talking points several times.

After the story first hit, Trudeau insisted that the allegation in the Globe and Mail story — that Jody Wilson-Raybould had been pressured by the Prime Minister’s Office while serving as minister of justice to help the Quebec-based engineering firm SNC-Lavalin avoid criminal prosecution in a bribery case — was false.

He said Wilson-Raybould’s continued presence in cabinet, as minister for Veterans Affairs, spoke for itself.

Then she quit — and the message changed. Wilson-Raybould, Trudeau said, had never raised with him the suggestion that the PMO was pressuring her to go easy on SNC-Lavalin, and he made it clear to her that any decisions on the file were hers alone to make.

The shifting nature of Trudeau’s explanations suggests a recognition that the government’s messaging has gotten out of hand and a correction was needed to contain some of the blowback, said one member of former prime minister Paul Martin’s inner circle.

Scott Reid, who served as the director of communications to Martin during the sponsorship scandal that led to a public inquiry, said that if enough voters conclude that Wilson-Raybould was thrown under the bus, it could leave a stain on the Liberals that would be hard to shed in an election year.

“If a conclusion was reached that that suggests that the only way to defend the actions and the integrity of the government is to put the boots to a former cabinet minister — who is a woman, who is Indigenous, who is from British Columbia, who’s very sympathetic — then I think that would have brand damage,” he told host Chris Hall on CBC Radio’s The House.

“And I think that’s why you’ve seen the government shift its tone over the course of the week, because I think it knew it was headed for trouble on that front.”

Wilson-Raybould has yet to speak publicly on the matter. Reid said the story is so murky at this point that it might be worth calling in a former Supreme Court justice to do a month-long investigation and release its conclusion publicly.

The Globe and Mail reported last week that officials in Trudeau’s office pressured Wilson-Raybould to tell the director of public prosecutions to draft a ‘deferred prosecution agreement’ that would allow SNC-Lavalin to avoid trial on bribery and fraud charges in relation to contracts in Libya.

Treasury Board President Jane Philpott took to Twitter after news of the resignation emerged to express her support for Wilson-Raybould.

Liberal government insiders have said in the past that Wilson-Raybould was difficult to work with. Procurement Minister Carla Qualtrough told The House she didn’t share that point of view, but also said she believed the prime minister’s explanation of the SNC-Lavalin affair.

In the SNC-Lavalin affair, one of the key questions remaining is who exactly said what to then-Attorney General Jody Wilson-Raybould, and did it amount to pressure to treat the company lightly. 3:26

Qualtrough said she’s never felt any pressure from the PMO in her portfolio — a file which touches on the administration side of corporate wrongdoing — adding that if she felt any of her fellow ministers were being pushed one way or another, she’d report it to Trudeau herself.

Trudeau said Friday that Wilson-Raybould at one point asked him if he was going to encourage her to make a particular decision on the SNC-Lavalin file.

“There were many discussions going on, which is why Jody Wilson-Raybould asked me if I was directing her or going to direct her to take a particular decision,” Trudeau said. “And I of course said no, that it was her decision to make and I expected her to make it.”

Qualtrough said she wouldn’t speculate on why Wilson-Raybould and Trudeau spoke about the matter or what was discussed, but said it’s not unusual to have talks about a massive company like SNC-Lavalin, or a new legal tool like the deferred prosecution agreements.

Reid said that if he were advising Trudeau now, he’d tell him to stanch the bleeding by answering media questions as clearly as possible and to find a way to wrap the controversy up quickly.

He admitted, however, that it’s not as easy as it sounds.

“If you work in the Prime Minister’s Office, you’d prefer it to not have to peel the onion completely,” Reid said. “Sausage-making is ugly.”

The SNC-Lavalin affair has sparked two government-related probes and led to the resignation of a cabinet minister. What’s been the impact on the Liberal Party brand? Our At Issue panel is here to discuss. 11:46

On Wednesday, an emergency meeting of the House of Commons justice committee was called to discuss a proposal from the Conservatives and New Democrats to hear from nine witnesses — including PMO officials and Jody Wilson-Raybould herself.

At the beginning of the meeting, the Liberals tabled their own motion that severely limited the witness list, leaving only three names. Attempts to amend the motion failed.

Reid admitted it doesn’t look good when a government shuts down lines of inquiry, but he argued that, due to solicitor-client privilege and cabinet confidence issues, it’s almost impossible to have those conversations in committee without the dialogue descending into a “political gong show.”