Mary Ito has been a broadcast journalist in Toronto for more than 30 years, best known for her time as the host of CBC Radio One’s Fresh Air program. Known for her skills as an interviewer,…

Ito spoke with people from all walks of life about any number of subjects. Since her time at the CBC, Mary has founded CRAM, a “learning festival” with the goal of connecting the innovation happening at Toronto’s universities with the public. CRAM was held in April in Toronto, with the participation of the city’s top schools, including the University of Toronto, Ryerson University, York University, and OCAD University. The topics covered at the event included everything from cutting-edge technology to mental health to land acknowledgement. The Edge caught up with her to discuss her new project, and more.

CRAM is described as a “learning festival.” How does it work?

CRAM is a unique learning festival. It is the first time every university in Toronto opened their doors to the public on the same night to present cutting-edge research across a multitude of disciplines. There were over 30 events that took place across four main campuses and included interactive presentations, panel discussions, demos, dance and music performances, films and lectures. And it was free. You registered online for whatever session interested you.

How did you get the idea for CRAM, and how did you make it a reality?

I think the idea had been developing in my brain for years from my work as a journalist interviewing scientists from many different fields. I was always struck by the incredible research that was being done in our universities, most of which never reaches the public. And whenever I did interviews with researchers, people were fascinated and wanted to know more. Realizing there was this knowledge gap between researchers and the public, I spoke to a number of people involved in learning events and they thought CRAM was a good idea to pursue. I then approached Ryerson, York, OCAD and U of T and one by one, they signed on. It was a volunteer effort and from concept to execution it took two years.

Why is it important to connect the ideas that are being hatched in universities with the public?

I think it’s important for several reasons. A lot of the research that’s going on in universities has the potential to profoundly change our lives − how we work, the way we play, the day-to-day of how we live our lives. At CRAM, we looked at a wide and eclectic range of topics: the impact of A.I.; a new story on climate change; the role of disability in the arts; the issue of surveillance; changing our “throwaway” culture; and solutions to homelessness. As taxpayers, we also help pay for our universities so perhaps these ideas and even the campuses themselves should be accessible to the wider public? When that happens, then university education becomes community education, available to everyone. And it’s exciting that we can have access to these new ideas on the ground floor, where they’re being shaped and developed.

What was it like to enter a completely new arena with founding and organizing CRAM? It seems like a big jump.

A nosedive off a cliff is more like it! I hate to say this because CRAM is all about the value of knowledge but ironically in my case, I think it paid to be ignorant! If I knew what was involved, I might not have done it. I had no idea of the kind of skills and the enormous amount of work involved in organizing four institutions for this event. But I had a lot of help! I am so thankful for the terrific group of smart and supportive people who believed in CRAM and helped me along the way. And they were always positive, even when there were some daunting challenges, which was key in getting through those tough times. 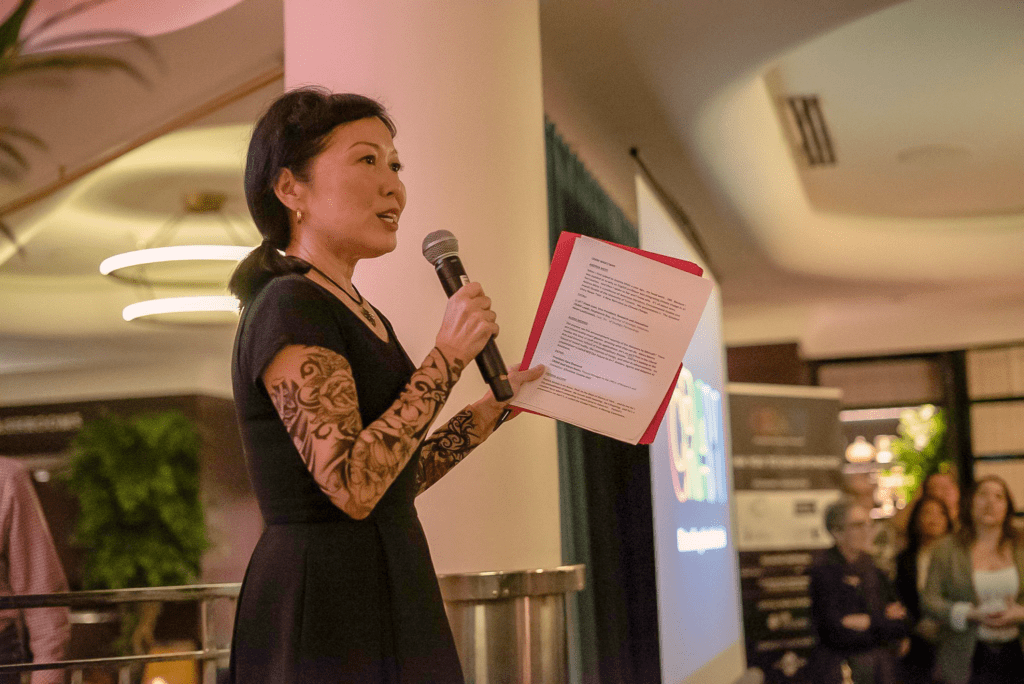 What are your goals for CRAM?

The main goal of CRAM is pretty simple: to bring the game-changing research of our universities to the public. It’s about helping to bridge that knowledge gap between the public and these schools. But one thing I really want to stress is that it’s research across disciplines. Often when people hear the word “research” they automatically think of the sciences. But research goes on in every discipline and it often gets ignored when it pertains to the arts or humanities. My intent was to give exposure to all kinds of research which can have an impact in different areas of our lives. As well, I was hoping that people no matter what their education or financial status would feel welcome at CRAM – that they didn’t feel they needed a university degree to attend and that they’d benefit from this night of research discovery.

The first CRAM event was held recently. How do you feel it went?

It went really well – beyond our expectations for a first-time event! We filled over 3,700 seats and many people moved from school to school to catch sessions. We conducted a post event survey and attendees gave CRAM an overall 94% satisfaction rate and the vast majority said they would attend again. Speakers gave a 100% satisfaction rate and said they would recommend participation to their colleagues. I’m just relieved that there was no freak snowstorm or anything hellish that interfered with the event. It all went pretty smoothly.

You’ve had a remarkable career as a broadcaster and journalist. What about that work do you find rewarding?

It’s very much like going to school which is probably why I was drawn to creating CRAM. You learn something new every day and you feel you’re a student of life. You get to ask questions no one else would dare ask, and you find out people’s deepest thoughts and why they do what they do. It’s an unusual position to be in and truly a gift when you have access to people and information you would never have otherwise.

How did you develop such a knack for interviewing people?

I’m not sure if it’s a knack or really just a curiosity about people and the belief that everyone, no matter what their position in life, has a story – whether it’s a personal story, a news story or a research story.

What role has social responsibility played in your career?

I’ve had a very fortunate life. I was born in Canada to a loving family. That’s the jackpot right there. And now I have my own family, friends and a great job. I try to give back by donating my time to various organizations. CRAM was a way to give back to the public. And it was also a way to give voice to researchers, who’ve shared their ideas with me and dedicated their lives to their work, often with little acknowledgement. (Full disclosure: my husband’s a researcher but he wasn’t a part of CRAM!)

Althea Clarke moved to Canada when she was a child and built her own success story.