Kiu Rezvanifar is something of a media renaissance man. A veteran TV broadcaster, producer, filmmaker, and publisher, he’s also a tireless advocate for the Iranian community in Canada and a champion of diversity.

He founded the Iranian Canadian Cultural Fellowship (ICCF) in 2000 and was elected President of the Canadian Ethnic Media Association in 2012. That same year, he ventured into the print publishing world with his successful magazine, Persian Tribune. In 2018, Rezvanifar launched his latest project, the Iranian-Canadian Business Expo (ICBE), which will return to the Metro Toronto Convention Centre on November 29 and 30, 2019 following a successful inaugural year. The media mogul took some time out of his busy schedule to speak with The Edge about his entrepreneurial journey, and his love for both his native Iran and his adopted home of Canada.

This wheel started turning about 30 years ago and it’s going faster and faster – sometimes too fast for me to even catch up because of the number of projects and areas that I’m involved in. The hard question for me to answer is “What do you do?”, because it’s not just one answer. If the person asking that question is from the field of media and broadcasting, I tell them I’m a documentary producer, director, and television producer. If they’re coming from publishing, then I’m a publisher because I publish magazines as well, but I am also involved in strategy, marketing, and branding.

I also serve on nine boards of directors; I’m an advisor to the Toronto police, I’m on the board of the United Nations chapter in Toronto; I’m involved with the CNE; I’ve been appointed to basically represent diversity in Ontario Media Development Corp., which has been recently rebranded as Ontario Creates; I’m involved in a lot. The success has been – if I can call it success, because I like to say I reach my objectives – it’s been very exciting. I enjoy my work, but I don’t call it work; it’s something more than just work.

What drove you to create the Iranian- Canadian Business Expo?

As I mentioned earlier, I’m a broadcaster, so the first thing I did in Canada was launch my television program [Iran Zameen, Ontario’s first Farsi-language TV program], and three years later, I launched the second one [Pasargad]. When you’re dealing with broadcasting to a community, you’re in touch with that community. At that time our community was just growing, so I found that there was a lot of interest in the Iranian-Canadian community here, especially in terms of businesses. People and even banks were asking me to introduce their corporate VPs to some Iranians, etc.

I realized that there was an appetite for the Iranian community to be showcased, and on top of it we are a community growing at a very fast pace. Also, the Iranian community is one of the most desirable communities in Canada in terms of revenue; they are very affluent and highly educated, so that created the fast rate of growth.

We launched the first Iranian-Canadian Business Expo in the world outside of Iran, in November 2018 at the Metro Toronto Convention Centre. It was a big, ambitious task, but with the fantastic team that I gathered, it reached its audience in the most beautiful way. We received a tremendous response from not only the Iranian community, but also abroad and from different communities too. The opening ceremony was attended by a lot of Canadian politicians, municipal and provincial, as well as the consulate generals from Pakistan and Turkey, and Vietnam’s chamber of commerce. So many people came, and it made quite a lot of noise globally, to the point that independent companies from Iran wanted to participate. Which is why I would like to make Toronto a hub for Iranian- Canadian business  activities,  so  that if there is a company in Germany that wants to showcase their product to that community, they come to Toronto. 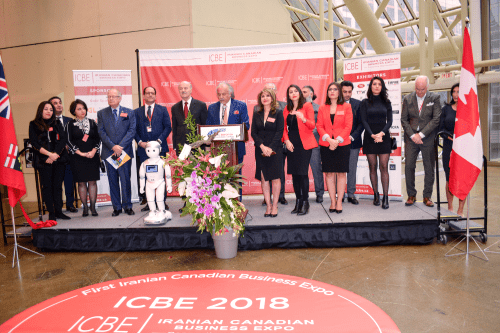 It has been very successful, not only because of the Iranian-Canadian businesses, but also companies like Turkish Airlines, RBC was there, and we had even some Canadian development companies who were there. It was an honour, honestly, because the way I serve my community, people trust me and in terms of credibility, we had a great response before we even had our business cards printed or our website ready. It’s a blessing when the community trusts you, and with that trust you need to really work hard, because that trust has to be kept at that level.

So, I decided to publish a magazine, Persian Tribune, in late 2012. It would be targeted at these people, and it was a tremendous success because we found that since it is a lifestyle magazine, it   is the only magazine of its kind in the world. We cover everything from food, to Canadian politics, to fashion, to the arts, both Canadian and Iranian, things that have to do with Iran or Persian culture. We also feature extremely successful Iranians around the globe, we covered

the youngest brain surgeon in Great Britain, who happens to be an Iranian woman. We featured an astronaut, a race-car driver, lots of successful people in the community. These are done in a manner that, even if the topics have to do with Persian culture, the execution is not Persian, it’s not traditional; it’s basically Canadian.

We found that not only is this target group reading it, but Canadians in general are reading it, because it’s in English. We have tons of readers that are non-Iranian. And with our online presence, we have readers from Estonia, Australia, Nigeria, to certain towns in Iran that I didn’t know. It has really bloomed. We’re proud of the fact that we produce our own content, none of it comes from the internet, we produce everything.

It’s a great way to share our culture with non-Iranians, things like food, wine, everything. It’s a lifestyle magazine, and a lot of the stories aren’t even specific to Iranians, it’s Canadian, because we are Canadian too.

Diversity is the infrastructure of this country, and only in this country. As we know, diversity and multiculturalism have a lot of challenges in different countries. In some countries people are fighting it. Canada, as I said is the best country in the world, and we have to cherish that. Diversity and multiculturalism is obviously the foundation of that, but it has to be protected in the same manner that the Canadian identity has to be preserved. The languages here are not just French and English, there are so many other languages.

It’s important because it is our cultural identities that need to be preserved, but as I said, not at the expense of our Canadian identity. This has been our mandate, and it has been very successful and now the Canadian Ethnic Media Association is one of the most respected institutions of its kind by all levels of government, and it is an honour to be there in that role.

My network for the past 30 years was not limited only to the Iranian community. I am privileged to be able to call a lot of powerful people friends, even if I might not even see them for a year or two, but when we call each other and talk, it’s like we just saw each other yesterday. And  I really do like to help people, and to maintain my network. I think the most successful thing a person can do is to build a network and do it with the right people, powerful people. It shouldn’t be about just the financial part; you need to build that network based on human relationships. Yeah, the business is there, which is basically the excuse for you to build that connection, but to continue it, it’s your relationship. And as I said, I am blessed enough to have that relationship with numerous people from different communities. When people come to me for help, or to pay back their community, I love to help them and would do so no matter who they are, whatever the community, if I can do it, I will do it.

I think everybody in any situation, they have to give back, not just to the community, but give back to Canada. That’s what I like to say: I don’t see community, I see Canada. After all, it is Canada that we chose as our home. I was born in Iran, but I chose to come to Canada, so it’s my home. It’s more of a home to me now than Iran.

Mary Ito has been a broadcast journalist in Toronto for more than 30 years, best known …