It’s not a stretch to say that one man single-handedly changed the way people think about, and act upon, modern business networking. Credited with being the original disruptor in that field 35 years ago, Dr. Ivan Misner is considered perhaps the foremost expert on the topic.

Misner is the founder and Chief Visionary Officer of Business Network International (BNI), the world’s largest business networking organization. Founded in 1985, the organization now has nearly 9,000 chapters globally. Last year, BNI generated $11.2 million (US) in referrals, resulting in $14.2 billion worth of business for its members. Dr. Misner is also a New York Times bestselling author who has written 23 books, including his latest, Who’s in Your Room? He shared some of his insights on networking and more with The Edge.

Did you set out to create a worldwide franchise when you launched BNI?

I’d like to tell you I had this vision of this international organization with almost 9,000 groups in 70 countries, but the truth is that I needed some referrals in my consulting practice. So, I put together people I trusted, who trusted me, and we started to reach out to each other.

After a few months, we had someone who couldn’t join because we really only take one person per profession. She couldn’t join because her profession was taken. She asked if I would help her open a second group. I actually said, “No, this isn’t what I do. I don’t run a network. I’m a business consultant.” She said, “This is sort of consulting. You are helping me in business.” I said, “That’s a stretch.” But we opened a second chapter.

It was at that point that I realized that I had struck a chord in the business community that I hadn’t expected. We don’t teach this in colleges and universities anywhere in the world. It was clear to me that there was an untapped need that I knew I had, but I didn’t realize that almost everyone has it too. It seems silly now, but that’s the truth. I just didn’t realize everyone was having the same challenge. I realized at that point that I created a plan to scale the company and build it into a much larger organization.

If you could impart a primary lesson in networking, what would it be?

They think that it’s just about closing deals, transactions. The truth is that networking is more about farming than hunting. It’s really about building relationships. People don’t get that. Businesspeople were not taught this in colleges and universities.

For example, I did a keynote at an all-day event in London. There were 900 people in the audience. I asked two questions: “How many of you are here today hoping to possibly sell something?” 900 people raised their hand. I said, “Great. How many here are hoping to possibly buy something?” No one raised their hands. Not one single person. This is what I call the “Networking Disconnect.” People show up at networking events to sell, but never to buy. That’s why people who go to networking events sometimes feel slimed. Everyone is trying to sell to them. They’re doing it wrong.

So you’re faced with someone who is in “sell mode,” and then what?

We call that “Premature Solicitation.” I see it happen all the time. “Hi, my name is so-and-so, let’s do business. Here are three copies of my card. Maybe you can refer me to others.” When that happens, I look at them and say, “Hi, I’m Ivan, what’s your name?” I’m not going to refer you to people if I don’t even know you.

What defines a “good networker”?

Do you think extroverts are natural networkers? And how does an introvert learn the skill?

There is this natural assumption that people who are extroverts are better at networking. I would argue that’s not necessarily true. Extroverts are  good at meeting people. They love to talk. But what is their favourite subject? Themselves. They will talk about themselves, but the truth is, you don’t want to do that. If you really want to build a relationship for business, you have to shut up, listen, and ask questions.

What are some great introductory lines to say to someone you’re meeting for the first time?

I think you have to start with the classic lines, talking about what you do, just to get a sense of what they do. But after that, I think there are a number of questions, and I’ve written them down in a number of books – one of them is The Twenty-Nine Cent Solution. I talk about a whole series of questions. Here’s a couple:

What do you love most about what you do? You just see people light up. Then follow that tree. Follow that discussion. Whatever they say, reply, “Tell me more about that.” Have a series of follow-up questions. You can have “What do you

I even have a formula for people to use when they have a one-to-one with somebody. I call it the GAINS Exchange. It’s an acronym. I first wrote about it in Business by Referral, 20-some years ago. It stands for Goals, Accomplishments, Interests, Networks, and Skills.

Are there major differences in the way that men and women network, converse, and interact?

Yes, yes, yes, and yes. I did a book called Business Networking and Sex: Not What You Think. It’s about the difference of men and women and how they network. It’s based on a survey we did of 12,000 people around the world.

We discovered that men are more likely to be transactional in their networking, and women were more likely to be relational in their networking than men. By that I mean that men tended to get straight to business, while women tended to – from a man’s perspective – meander in discussion. Or, they introduce themselves differently.

Women say to me, “Men tend to introduce themselves like a resume.” For example: “I’m the Vice President of XYZ Company, I have X number of people working for me, we generate so many dollars of business per year.”

Women tend not to introduce themselves quite like that. They tend to be more relational. This is an example of one I witnessed: I was standing there talking to a man and a woman. Up walked a fourth person – a second woman – and the woman who was already there said, “Hi, my name is so-and-so. How did you hear about tonight’s event?” Not, “Who are you? What do you do?” The woman who stepped in said, “Sally invited me.” The first woman said, “You know Sally? I know Sally too. How do you know Sally?”

I glance at the man next to me, and he gives me an eye roll like, “Get me out of here. Who cares about Sally? We’re here to network!” He didn’t say that, but you could just see it in his eyes. I watched as these two women made a personal, relational connection.

How do we choose who to network with?

You never know who people know. I don’t care if I’m networking up or down or peer to peer – they have to be good at what they do, and passionate about what they’re doing. 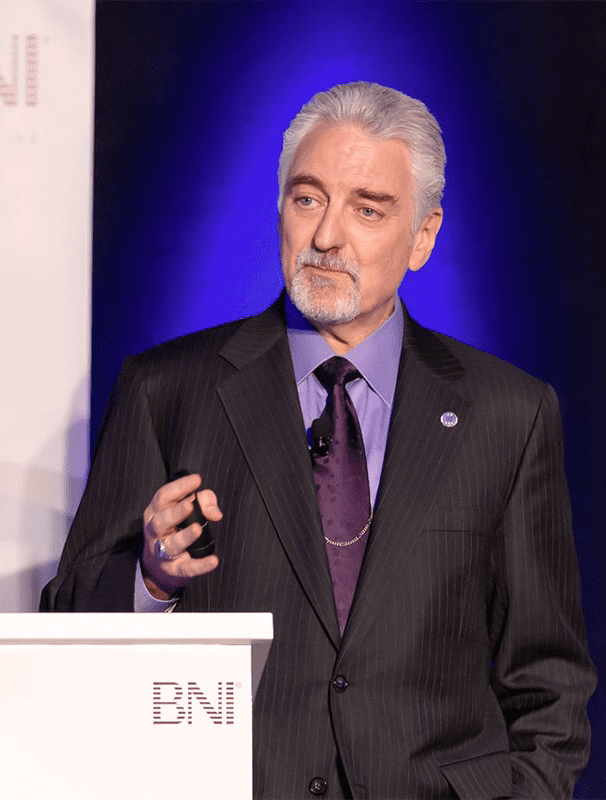 One of the best contacts I’ve ever gotten in my entire life came from a BNI member who was a solopreneur life coach – small practice, not well known. She introduced me to somebody who introduced me  to  somebody.  I  had a chance to meet bestselling author Jack Canfield, who invited me to the Transformational Leadership Council. From the Transformational Leadership Council, I got invited to Necker Island, where I spent two weeks with Richard Branson.

Had I talked to that life coach and then said to myself, “This person has nothing to offer me,” I would have missed two of the most interesting weeks I’ve ever spent professionally. You never know who people know. I call this the “Butterfly Effect” of networking.

I think you just have to find the nuggets in the people you meet, because you just never know where these relationships can lead.

Kiu Rezvanifar is something of a media renaissance man. A veteran TV broadcaster, producer,…