At least 16 states — led by California — have joined together to sue the Trump administration over the U.S. president’s declaration of a national emergency to fund a wall on the U.S.-Mexico border.

The lawsuit was filed in U.S. District Court for the Northern District of California Monday, after Trump invoked emergency powers on Friday.

Colorado Gov. Jared Polis and Attorney General Phil Weiser, both Democrats, said in a statement that the wall project could divert tens of millions of dollars from military construction projects in Colorado, one of the states that joined the suit.

Trump’s declaration will shift billions of dollars from military construction to the border. He made the move after Congress approved far less border security funding than Trump wanted for the wall, which the Republican considers a national security necessity. 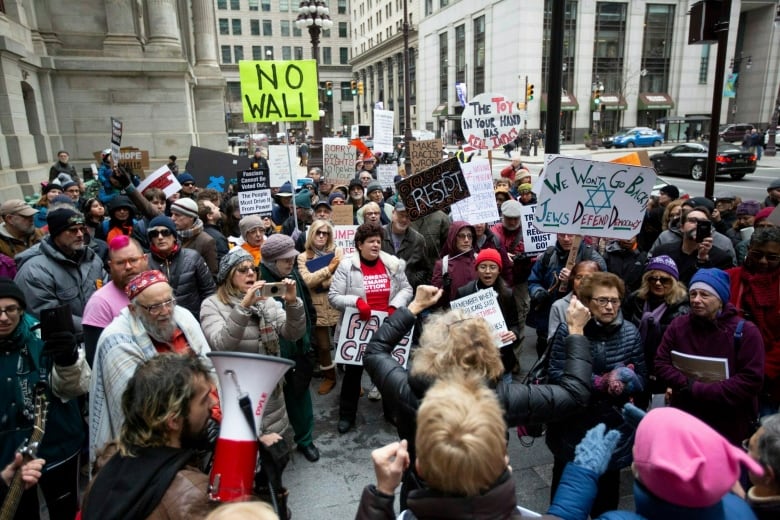 A coalition of 16 states launched a lawsuit against the Trump administration over Trump’s declaration of a national emergency as rallies organized by Move On were held in various cities. (Margo Reed/The Philadelphia Inquirer/Associated Press)

Illegal border crossings have declined from a high of 1.6 million in 2000. But 50,000 families are now entering illegally each month, straining the U.S. asylum system and border facilities.

Trump’s critics have argued he undercut his own rationale for the emergency declaration by saying he “didn’t need to do this” but wanted to get the wall built faster than he otherwise could. In announcing the move, he said he anticipated the legal challenges.

Protesters also turned out Monday to voice their anger at the declaration.

“Trump is the national emergency!” chanted a group of hundreds lined up Monday at the White House fence while Trump was in Florida. Some held up large letters spelling, “Stop power grab.” In downtown Fort Worth, Texas, a small group carried signs with messages including “No wall! #FakeTrumpEmergency.” 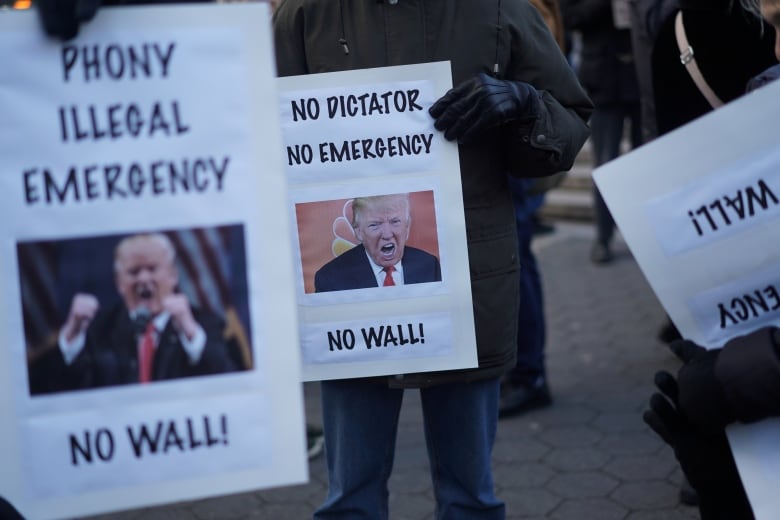 Protesters turned out in cities across the country including New York, Washington, and Philadelphia. (Go Nakamura/Reuters)

Organized by the liberal group MoveOn and others, Monday’s demonstrations took the occasion of the Presidents Day holiday in the U.S. to assail Trump’s proclamation as undemocratic and anti-immigrant.

Kelly Quirk, of the progressive group Soma Action, told a gathering of dozens in Newark, N.J., that “democracy demands” saying “no more” to Trump.

“There are plenty of real emergencies to invest our tax dollars in,” said Quirk.

In New York City, hundreds of people at a Manhattan park chanted “No hate, no fear, immigrants are welcome here” as several of them held up letters spelling, “IMPEACH.”

There were some counter-protesters, including in Washington, where there was a brief scuffle in the crowd.

“President Trump declared a national emergency in order to spend billions of taxpayer dollars on his border wall obsession,” Manar Waheed of the American Civil Liberties Union told protesters rallying in a Washington park before heading to the nearby White House fence. The ACLU has announced its intention to sue Trump over the issue.

Ana Maria Archila, co-executive director of the left-leaning Center for Popular Democracy, said the president had undertaken to “steal money that we desperately need to build a country of our dreams so that he can build a monument to racism along the border.”

At one point during the rally, a counter-protester walked through the crowd toting a sign saying, “Finish the wall” on one side and “Protect the poor” on the other. Another man snatched his sign from him, sparking a short scuffle.