After a generation in the workforce Canadian women directly control a large chunk of Canadian financial assets — about $2.2 trillion, according to a new study from CIBC. That wealth figure doesn’t include the family home.

Women will manage an increasing concentration of investable assets to 2028, as the baby-boom generation moves into its senior years, and the women continue to outlive the men by about six years.

What that comes from is labour market progress on the part of women. Women are also increasing their employment in higher paying occupations, and the wage gap is shrinking.– Katherine Judge, CIBC economist

This generation of women have more money because they’ve been in the workforce most of their lives, but also because more of them are taking control of financial decisions, the study found.

“What that comes from is labour market progress on the part of women. Women are also increasing their employment in higher paying occupations, and the wage gap is shrinking,” says CIBC economist Katherine Judge.

“And women who are married are contributing a record 47 per cent of the family’s income, so those labour market gains have contributed to greater wealth for females in general,” she told CBC News.

And 22 per cent of them say they make the investment decisions for their households, according to the survey by the bank.

Add those married women who make financial decisions to the single, divorced and widowed women who also take care of their own assets, and 41 per cent of women have full control over their money.

The figures about who holds the purse strings come from an online survey of 4,591 randomly selected Canadian adults performed Nov. 28 to Dec. 6, 2018. 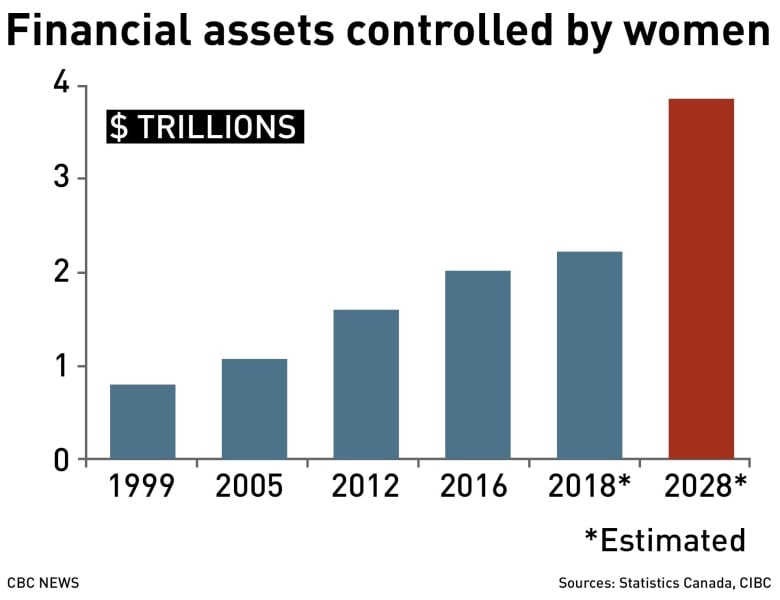 By 2028, women will control $3.8 trillion, one third of financial assets in Canada, CIBC estimates.

“What we do see is that women are staying single longer and outliving men, so married women in particular are outliving their spouses by about six years so they’re taking more of a leadership role in managing that wealth,” Judge said.

The implications of that shift are that the wealth management profession needs to rethink its approach to giving investment advice for women,  she said.

Women tend to have less confidence as investors, she said. As a result, they often don’t achieve the growth they could with their investments, she said.

“More work needs to be done equalizing the figures between men and women,” Judge said.

CIBC did not paint a roadmap for how wealth managers could meet the needs of women, but Judge said greater understanding of women’s “financial journey” is needed.

That includes making provision for the kinds of life events that force women out of the workforce, including caring for children and elderly parents.

“Women are three times more likely than men to quit work to care for others, and that plays into their investment needs,” Judge said.